Finding a CSRF vulnerability in phpBB

The phpBB team released phpBB version 3.1.7-PL1 on Jan 11, 2016 which fixed a CSRF issue I found in the admin control panel BBCode creation form. Since BBCode is basically whitelisted HTML created by admins this CSRF vulnerability could allow an attacker to inject arbitrary HTML or JavaScript into forum posts.

This was my first time looking at phpBB and I was very happy with actually being able to find something with significant impact within a few hours.

A good starting point for understanding the features and flow of phpBB controllers would be to look at something users would have access to with complex operations going on. ./phpbb/phpBB/posting.php is a decent starting point since this is the page users hit when creating topics/posts. This controller should have permission checks, record creation, form submission, and maybe some HTML escaping. At the top of the file we can see something interesting:

Mostly all of the request variables used in this controller are defined a the top of the file, some of which are taken from this weird request_var() function which IntelliJ tells me is deprecated. This function is basically a wrapper for \phpbb\request\request_interface::variable(). Looking at \phpbb\request\request::variable() it can be seen that this method returns the requested var from some associative array. The array is the concatenation of the $_POST and $_GET global variables. For those of you not familiar with PHP these are globals which contain the POST request and query vars (respectively). All of these variables are also trim()'d and type casted to match the type of whatever the default value is.

This is a key bit of information: if we can find some place in a form where a POST request is made we should also be able to make the request with a GET. Maybe we should start looking for CSRF bugs?

How CSRF tokens work in phpBB

Doing a simple find in file for "form" in IDEA I came across this line:

Looking into the check_form_key() function it's clear that this is the function to check the CSRF token (using === mind you)... but it's done manually. And further down the file:

So adding and checking the CSRF token is done manually. This smells like something that can lead to errors!

The following image is the result of the search for add_form_key() and check_form_key() respectively, with the admin control panel includes folder expanded: 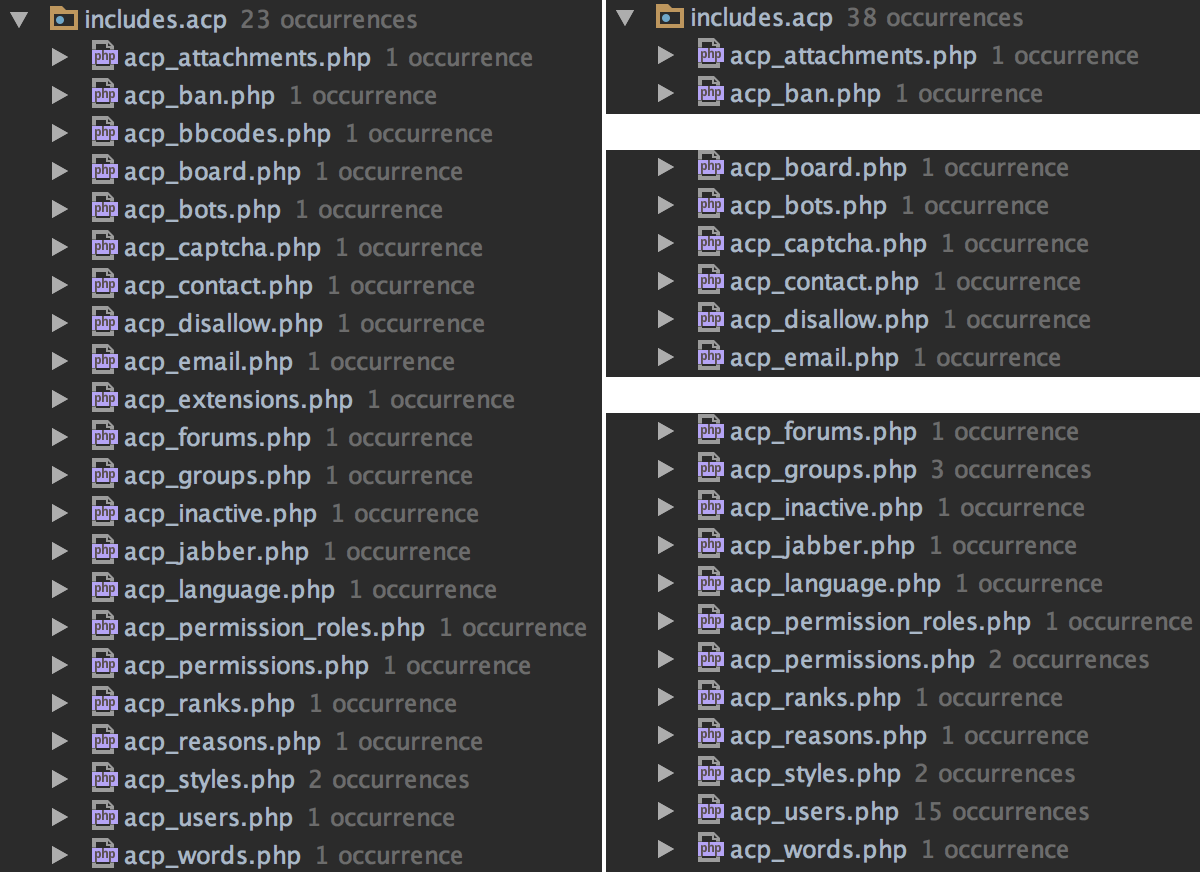 acp_extensions.php isn't too interesting since that just lets admins toggle showing unstable versions when checking extensions for updates, so the worse a CSRF vuln here does is allow an attacker to make an admin think their extensions are outdated.

The check in acp_bbcode.php is of interest though since, although the form is submitted via POST, the request_var() method is used to retrieve all form variables. We should be able to create BBCode over GET with a CSRF token omitted!

Here's a demonstration of this vulnerability:

Although this vulnerability can lead to XSS, it's really not practical. By default phpBB enforces re-authentication when admins go to the ACP and gives the admin a different admin CP session ID. The SID also needs to be present in both the cookie and query string by default.

In theory a timing attack is possible since session IDs are checked with the equals operator ($this->session_id !== $session_id) but this is also not very practical since sessions are tied to IP, browser, and some other information but most importantly doing it over the network isn't exactly easy.

The only way I see this being practical is if there's also an XSS vulnerability on some admin page that would allow you to inject a script to get the admin SID from document.location then perform the exploit.