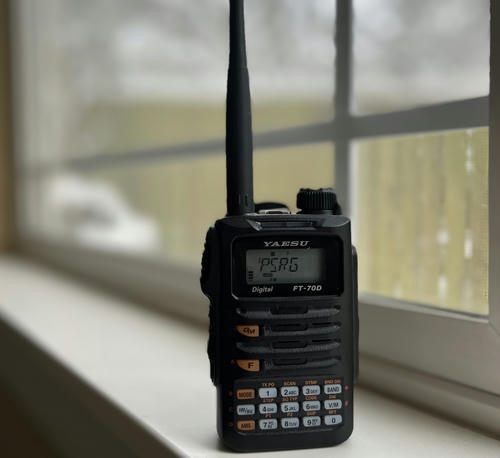 This article dives into my full methodology for reverse engineering the tool mentioned in this article. It's a bit longer but is intended to be accessible to folks who aren't necessarily advanced reverse-engineers.

Click on any of the images to view at its original resolution.

Ham radios are a fun way of learning how the radio spectrum works, and more importantly: they're embedded devices that may run weird chips/firmware! I got curious how easy it'd be to hack my Yaesu FT-70D, so I started doing some research. The only existing resource I could find for Yaesu radios was someone who posted about custom firmware for their Yaesu FT1DR.

The Reddit poster mentioned that if you go through the firmware update process via USB, the radio exposes its Renesas H8SX microcontroller and can have its flash modified using the Renesas SDK. This was a great start and looked promising, but the SDK wasn't trivial to configure and I wasn't sure if it could even dump the firmware... so I didn't use it for very long.

Yaesu provides a Windows application on their website that can be used to update a radio's firmware over USB: 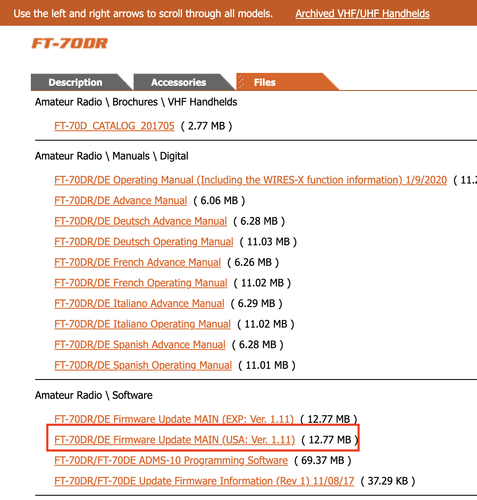 The zip contains the following files:

I'm going to assume that the file specific to the FT-70D, "FT-70D_ver111(USA).exe", will likely contain our firmware image. A PE file (.exe) can contain binary resources in the .rsrc section -- let's see what this file contains using XPEViewer: 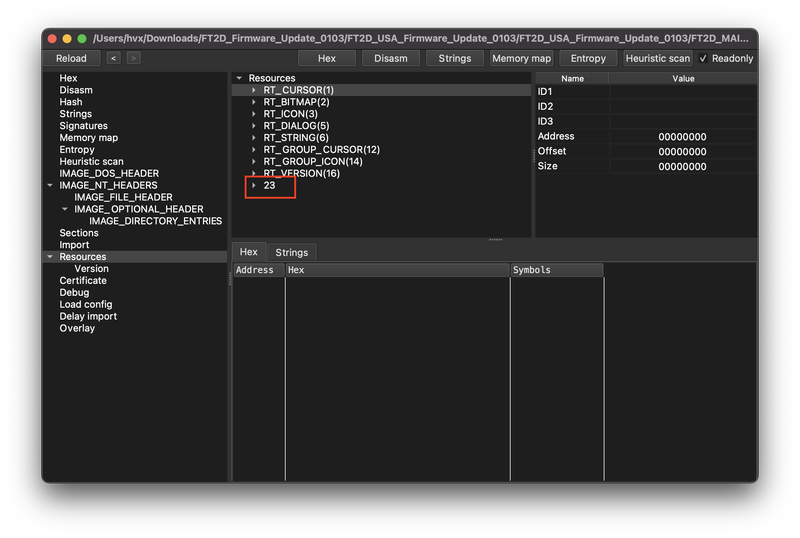 Resources fit into one of many different resource types, but a firmware image would likely be put into a custom type. What's this last entry, "23"? Expanding that node we have a couple of interesting items: 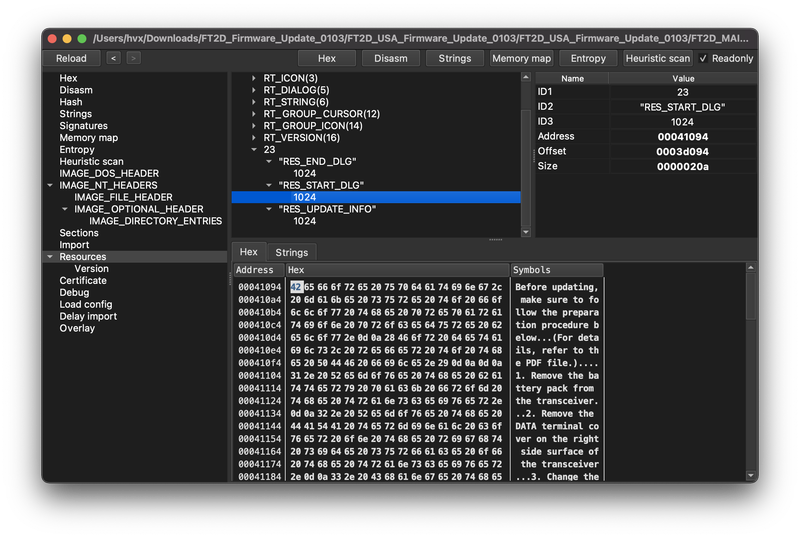 RES_START_DIALOG is a custom string the updater shows when preparing an update, so we're in the right area! 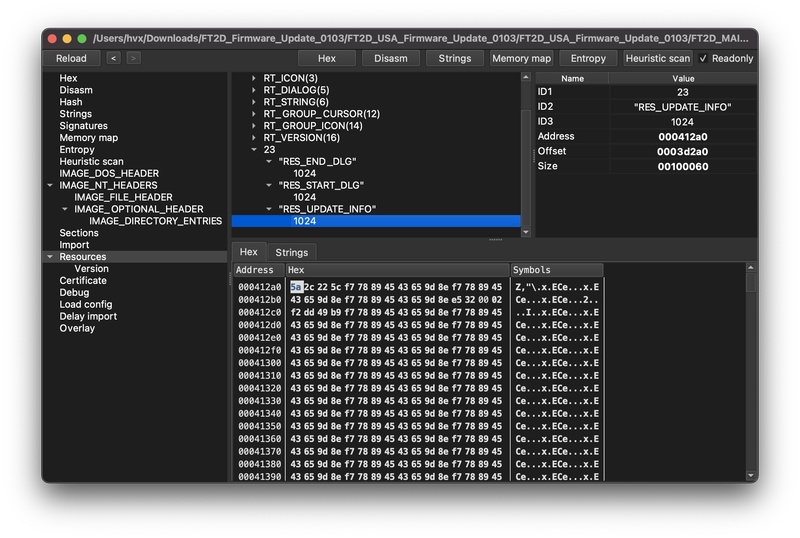 RES_UPDATE_INFO looks like just binary data -- perhaps this is our firmware image? Unfortunately looking at the "Strings" tab in XPEViewer or running the strings utility over this data doesn't yield anything legible. The firmware image is likely encrypted.

Let's load the update utility into our disassembler of choice to figure out how the data is encrypted. I'll be using IDA Pro, but Ghidra (free!), radare2 (free!), or Binary Ninja are all great alternatives. Where possible in this article I'll try to show my rewritten code in C since it'll be a closer match to the decompiler and machine code output.

A good starting point is the the string we saw above, RES_UPDATE_INFO. Windows applications load resources by calling one of the FindResource* APIs. FindResourceA has the following parameters:

In our disassembler we can find references to the RES_UPDATE_INFO string and look for calls to FindResourceA with this string as an argument in the lpName position.

We find a match in a function which happens to find/load all of these custom resources under type 23. 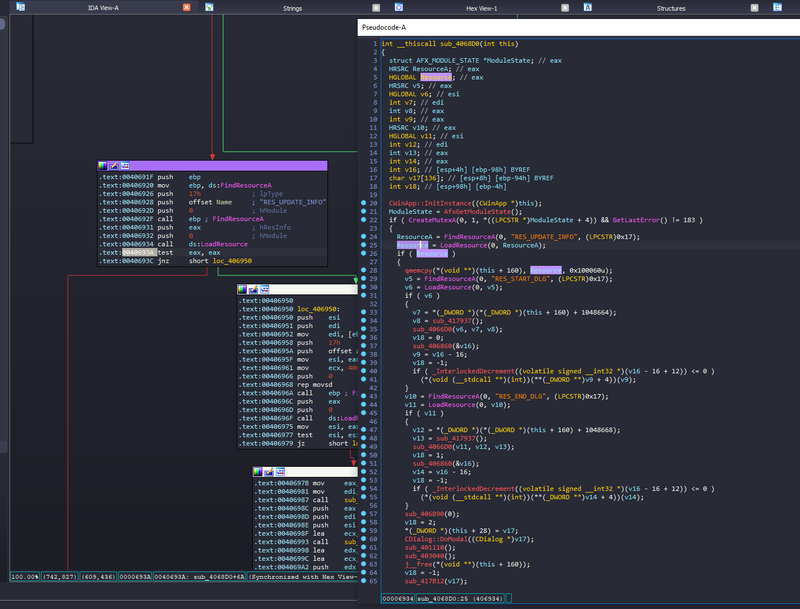 We know where the data is loaded by the application, so now we need to see how it's used. Doing static analysis from this point may be more work than it's worth if the data isn't operated on immediately. To speed things up I'm going to use a debugger's assistance. I used WinDbg's Time Travel Debugging to record an execution trace of the updater while it updates my radio. TTD is an invaluable tool and I'd highly recommend using it when possible. rr is an alternative for non-Windows platforms.

The decompiler output shows this function copies the RES_UPDATE_INFO resource to a dynamically allocated buffer. The qmemcpy() is inlined and represented by a rep movsd instruction in the disassembly, so we need to break at this instruction and examine the edi register's (destination address) value. I set a breakpoint by typing bp 0x406968 in the command window, allow the application to continue running, and when it breaks we can see the edi register value is 0x2be5020. We can now set a memory access breakpoint at this address using ba r4 0x2be5020 to break whenever this data is read.

Our breakpoint is hit at 0x4047DC -- back to the disassembler. In IDA you can press G and enter this address to jump to it. We're finally at what looks like the data processing function:

We broke when dereferencing v2 and IDA has automatically named the variable it's being assigned to as Time. The Time variable is passed to another function which formats it as a string with %Y%m%d%H%M%S. Let's clean up the variables to reflect what we know:

Let's see what it does:

I think we've found our function that starts decrypting the firmware! To confirm, we want to see what the output parameter's data looks like before and after this function is called. I set a breakpoint in the debugger at the address where it's called (bp 0x404842) and put the value of the edi register (0x2d7507c) in WinDbg's memory window.

Here's the data before: 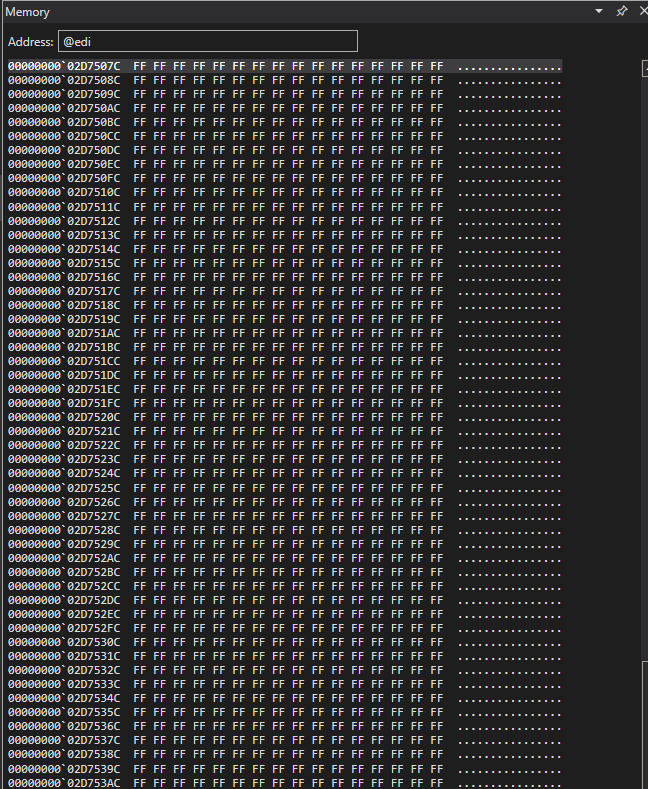 After stepping over the function call: 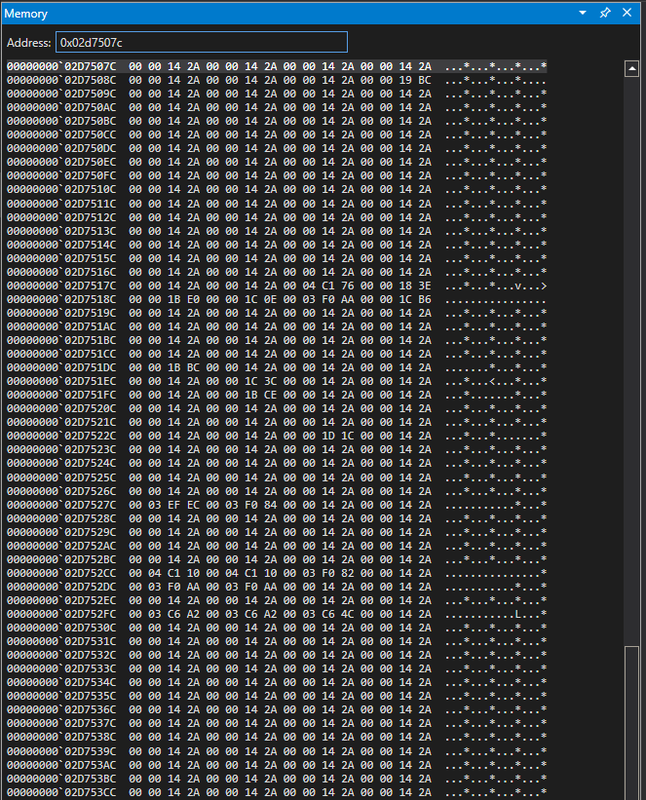 We can dump this data to a file using the following command:

010 Editor has a built-in strings utility (Search > Find Strings...) and if we scroll down a bit in the results, we have real strings that appear in my radio! 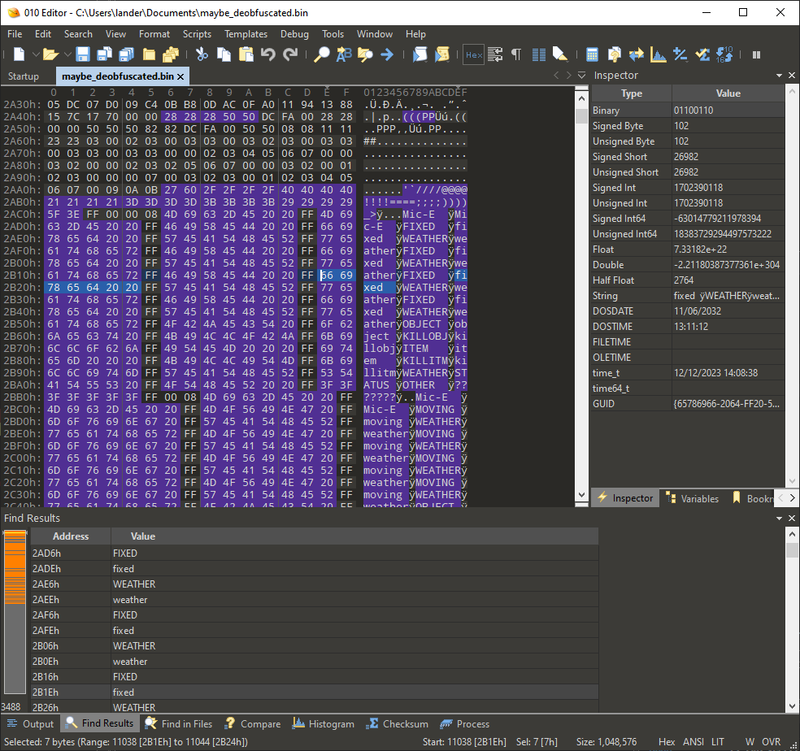 At this point if we were just interested in getting the plaintext firmware we could stop messing with the binary and load the firmware into IDA Pro... but I want to know how this encryption works.

Just to recap from the last section:

Let's look at the firmware image decryption routine with some renamed variables:

At a high level this routine:

This routine does this process over 8 bytes at a time and completely fills the 64-byte scratch buffer with 1s and 0s just like the table above.

Oof. This is substantially more complicated but looks like the meat of the decryption algorithm. We'll refer to this function, sub_407980, as decrypt_data from here on out. We can see what may be an immediate roadblock: this function takes in a C++ this pointer (line 5) and performs bitwise operations on one of its members (line 18, 23, etc.). For now let's call this class member key and come back to it later.

This function is the perfect example of decompilers emitting less than ideal code as a result of compiler optimizations/code reordering. For me, TTD was essential for following how data flows through this function. It took a few hours of banging my head against IDA and WinDbg to understand, but this function can be broken up into 3 high-level phases:

The inner loop in the else branch above I think is kind of nasty, so here it is reimplemented in Rust:

We now need to figure out how our key is set up for usage in the decrypt_data function above. My approach here is to set a breakpoint at the first instruction to use the key data in decrypt_data, which happens to be xor bl, [ecx + esi + 4] at 0x4079d3. I know this is where we should break because in the decompiler output the left-hand side of the XOR operation, the key material, will be the second operand in the xor instruction. As a reminder, the decompiler shows the XOR as:

The breakpoint is hit and the address we're loading from is 0x19f5c4. We can now lean on TTD to help us figure out where this data was last written. Set a 1-byte memory write breakpoint at this address using ba w1 0x19f5c4 and press the Go Back button. If you've never used TTD before, this operates exactly as Go would except backwards in the program's trace. In this case it will execute backward until either a breakpoint is hit, interrupt is generated, or we reach the start of the program.

Our memory write breakpoint gets triggered at 0x4078fb -- a function we haven't seen before. The callstack shows that it's called not terribly far from the decrypt_update_info routine! 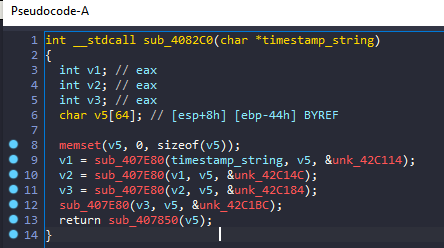 Not a lot to see here except the same function called 4 times, initially with the timestamp string as an argument in position 0, a 64-byte buffer, and bunch of function calls using the return value of the last as its input. The function our debugger just broke into takes only 1 argument, which is the 64-byte buffer used across all of these function calls. So what's going on in sub_407e80? 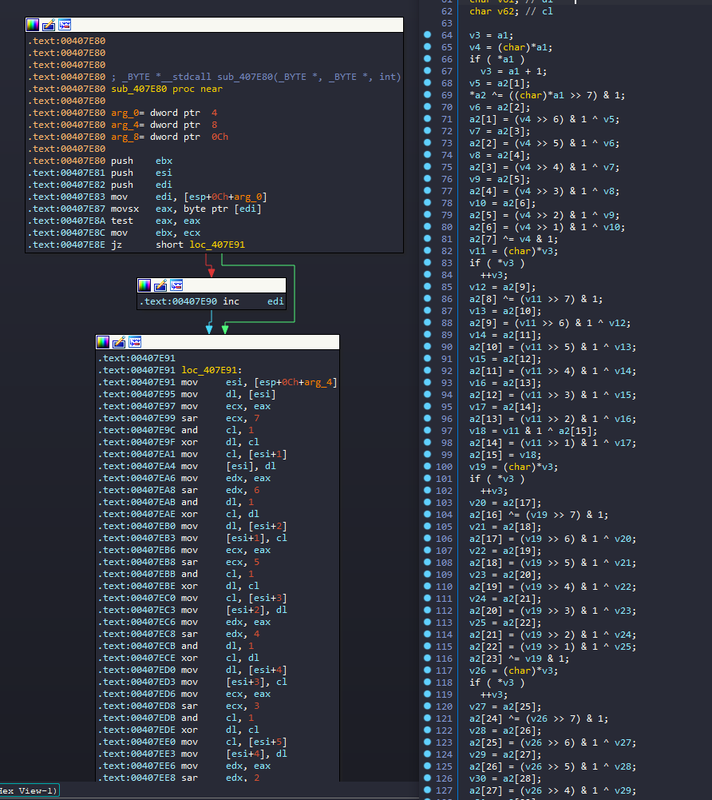 The bitwise operations that look supsiciously similar to the byte to bit inflation we saw above with the firmware data. After renaming things and performing some loop unrolling, things look like this:

The only mystery now is the set_key routine:

This function is a bit more straightforward to reimplement:

My decryption utility which completely reimplements this magic in Rust can be found at https://github.com/landaire/porkchop.

IDA thankfully supports disassembling the Hitachi/Rensas H8SX architecture. If we load our firmware into IDA and select the "Hitachi H8SX advanced" processsor type, use the default options for the "Disassembly memory organization" dialog, then finally choose "H8S/2215R" in the "Choose the device name" dialog...: 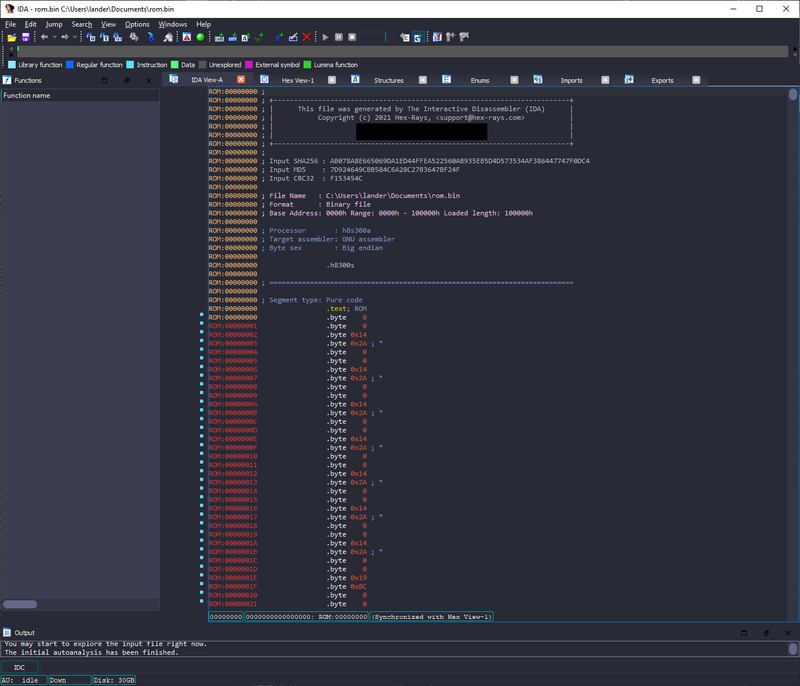 We don't have shit. I'm not an embedded systems expert, but my friend suggested that the first few DWORDs look like they may belong to a vector table. If we right-click address 0 and select "Double word 0x142A", we can click on the new variable unk_142A to go to its location. Press C at this location to define it as Code, then press P to create a function at this address: 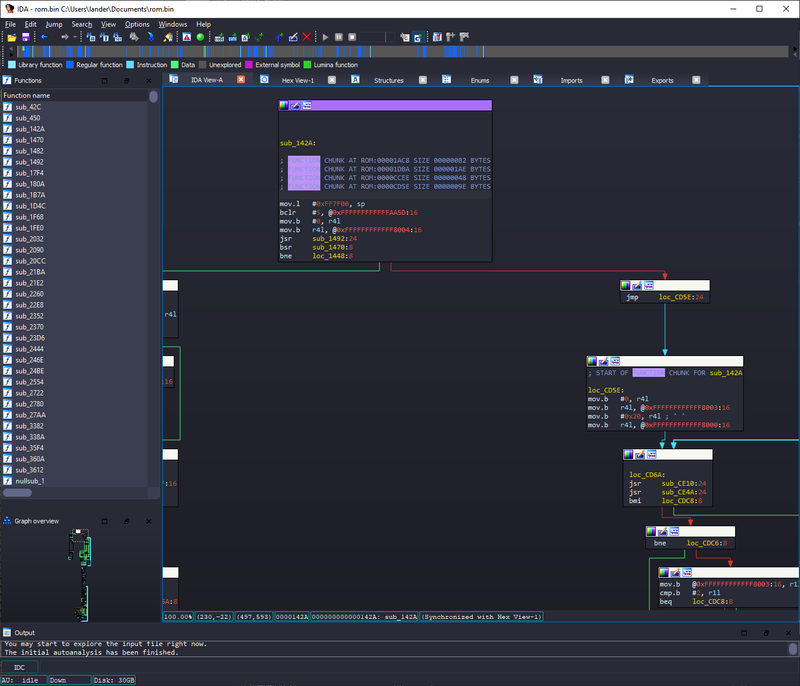 We can now reverse engineer our firmware :)